So, Tom and I went to this lamely-named but well-intentioned fundraiser:

It was a benefit to support Gulf fishermen. It was in the space where Jack & Jake's Market will eventually be, any time between mid August and late October. Ate some pretty good food there- there was a pulled pork with cucumber and squash salad/relish and a chilled tomato soup with crab salad from the Donald Link folks, a shrimp and corn salad from Patois, sausage from Crescent Pie & Sausage, local blueberries with creole cream cheese, jambalaya, popsicles and watermelon lemonade from Satsuma, gelato from La Divinia, and other stuff. Also local beer (Bayou Teche, HeinerBrau, Southern Magnolia, NOLA Brewing) and wine (uh, not local.)

There was a band and very nice people. I wore my new chapeau! (here it is, in a picture taken a couple days ago) 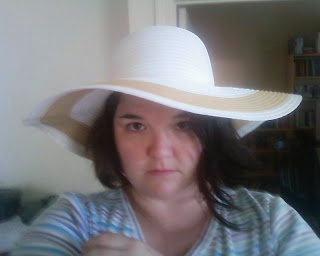 we stayed for about an hour or so, grazed, and left to head home and watch the season finale of Dr. Who. An excellent Saturday night indeed.

Well, except for the enormous bug in our apartment that Taz pointed out and Tom had to kill, which traumatized him for hours. (To, not Taz. Taz took it all in stride and was pretty pleased with himself.) It wasn't a roach, just your garden variety enormous freaking bug. Ah, the joys of New Orleans living.
Posted by Nora at 9:55 PM