Because it is important to me to keep YOU, my blog audience of MULTITUDES entertained, I decided today to do a little recon in Treme- located Lil' Dizzy's, Dooky Chase, and Willie Mae's Scotch House while driving. I am starting to get the hang of the basics of this side of town. Mid-city is my next challenge. It's like a whole other world out there!

So, all that driving around worked up an appetite and I stopped at the Cake Cafe in the Marigny. I knew I was gonna have an early-ish lunch so I wanted to keep it light. Um. I ended up with the biscuits and sausage gravy with grilled andouille on top. Freshly baked biscuits- good. Sausage gravy- good (not too thick or congealed). Andouille- GOOD! Yum. 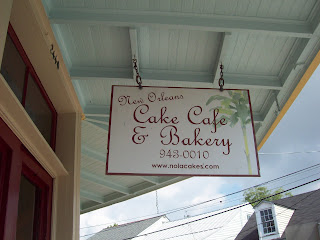 The Cake Cafe is a pretty low key place where you place your order at the counter and then wait for it to come out. The goodies behind the glass looked most delicious. There was a "healthy grits" special that was topped with grilled veggies and goat cheese. Will keep that in mind for the future.

I toddled back to my car and made my way back to the French Quarter, parked the car on Royal Street, and started to wander around. I considered a stop at Leah's Pralines, but decided that I didn't want to carry them around. (Now that I'm home, that decision makes me sad.) After a bathroom break at the Hotel Monteleone, I meandered over to the Green Goddess on Exchange Place for lunch. 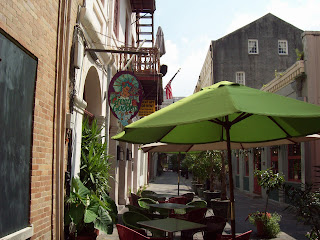 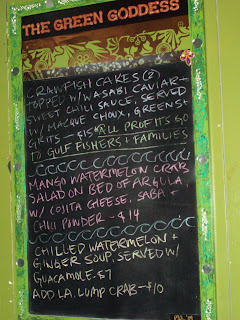 I hit it just as it opened at 11- I had read that the place is tiny so I wanted to get there before the lunch rush. I sat at the bar and ordered a cocktail- the "See Rock City" Mint Julep, which was not bourbon based, but rather Catdaddy Carolina Moonshine. It also had muddled mint, ginger syrup, and lychee juice. So refreshing and delicious. The ginger and mint stimulated my appetite and helped me shake off the sweaty humid day outside. 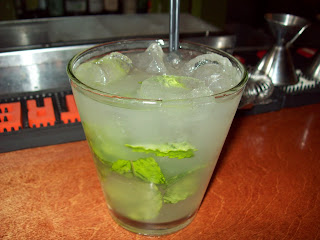 I decided to order the crawfish cake special- two crawfish cakes with wasabi caviar, collard greens, and macque choux over grits. The wasabi caviar was amazing, and an excellent counterpart to the rich decadent crawfish cakes. Also, proceeds of that special would be donated to the Gulf fishers and families. 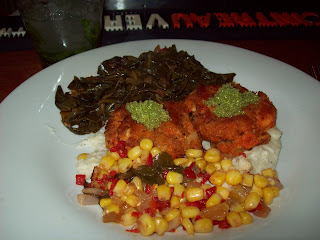 I resisted dessert, though I was super tempted by the "Chocolate Biscuit Heaven" that I now wish I'd had with a glass of their Vietnamese style iced coffee with condensed milk because I'm hungry again!

It started pouring while I was eating and let up as I finished (that was a big reason I didn't stick around for dessert) so I bolted back to the car before the rumbling thunder opened up the skies once again. I barely made it back to the car when the rain started up again.
Posted by Nora at 12:28 PM